The One About the Time I Varnished Over the Birdshit 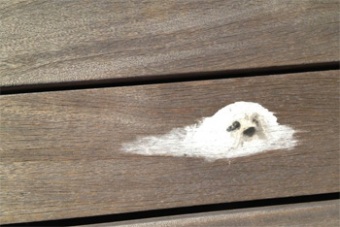 The house where I spent most of my childhood was considered old by California standards. It was built in 1937. Yes, I know what you are thinking: that you are still wearing underwear older than that house. So? Get used to the idea that Holden Caulfield [1], my parents, and about two trillion other people didn’t even move to Cali until after World War II. No, seriously, if you refer to the most authoritative source on the subject (e.g., Wikipedia), you will learn that there were about 10 million people living in California in 1950. Guess how many live there now? Four quadrillion. Look it up, dude.

For all you authentic-style people in the Middle Atlantic states and New England who are living in and/or renovating stone houses built during the Revolutionary War in order to create your personal brand’s distinction, please understand that for the overwhelming majority of Californians, a house built in 1937 seems like a relic. A Californian will one look at your house and think it was built by Pope Innocent IV in the year 1245 A.D.[2] and wonder why? And because their home is about 10 years old and 5,000 square feet with cathedral ceilings (all work done by a architect, developer, contractor and illegal aliens) and your farmhouse (all work and cleanup performed by you) is about 900 square feet with ceilings that that would scrape Spud Webb’s head [3], they would pity you. Their pity might be reserved if their house has been foreclosed upon (which represents approximately half the population). [4]

But a house built in 1937 in a California suburb will never be considered a McMansion or have the word “compound” associated with it. My childhood home, a single-story ranch house built in the shape of a “U,” sits on a quarter-acre lot surrounded by similar homes. If you use Google maps, you can close in on the house and see for yourself. However, the images miss a lot:

My father, the surgeon, and I built this deck with our own hands, a lot of sweat and strain, and his fucking swearing at me. After all the hours of planning, visiting hardware and lumber stores, and lessons about safety and the plumb line, I am pretty sure that the only detail either of us remembers about building this deck was the time I varnished over the birdshit.

OK, would one of you genius surgeons out there explain to me why someone who depends on the reliability and sensitivity of his hands and fingers for a living – to serve his patients and support his family – would decide to play at being a carpenter? Hammers and nails. Circular saws and jigsaws. Sharp, metal things that can pierce, slice and rip with extreme prejudice. I am positive that my father, the eye surgeon, had no previous experience with tools. I am positive that he decided that our house should have a deck for outdoor entertaining, that building said deck would provide us with an opportunity for father-son bonding, and that said deck would allow him to brag in front of his more “sensitive” surgeons.

I learned enough to wonder why we were varnishing the deck after we had already stained it. Once you stain the redwood, it achieves a luxurious finish. A matte finish that is a bit tacky, even after it has rained. But the thing about varnish is that it makes wood look shiny, but it is also slick as hell. After it rains? Whoa, look out cowboy! You will be slipping and sliding on a varnished redwood deck. I think it was the shiny part that my father liked. What is it about parents and shiny things?

In the middle of one of these smooth strokes, a bird shit on the deck. I never saw the fucker, only the evidence of his/her passing presence. Its aim was perfect. Not a drop touched me. The stuff landed inches from my moving paintbrush. No Holy Ghost dove jokes here, please.

My father, witnessing only the outcome of this deliberation, went ballistic. In a single stroke – in his opinion – I had ruined the entire project.

“Jesus H. Christ on a bicycle!” he screamed. And then he proceeded to scream some more. Whatever punishment followed mattered so little that I do not even recall it. I had created something transcendent on our deck. Something beautiful visitors could visit and be amazed by for decades. Something you could probably still see on Google maps if the current owners cut down the trees in the backyard.

What’s the lesson here for parents? Your teenagers are thinking, they are just thinking different than you. And that’s probably not going to change.

1. Of course J.D. Salinger never wrote about Holden moving to Cali, which was the correct thing to do. However, we are free to conjecture that a post-World War II young man on the East Coast who is disaffected by institutions and his prospects with women might (might!) envision joining his sellout brother with money and opportunity on the West Coast if for no other reason than to get a new perspective on the matters at hand and perhaps get laid. This author grew up around millions of Holdens who fled the East Coast at the same time and who ended up fathering my schoolyard rivals.

2. Of course, the joke would be on us Coasties. Popes in the Middle Ages were are renowned for destroying, not building.

3. No disrespect intended towards the 5’7” Spud Webb, who is still the most frightening dunkenstein monster the NBA has ever known.

5. I am grateful to Microsoft Word for taking this sentence out of the passive tense in which it originally appeared.

6. Most recently, my basement flooded following torrential rains and the storm water removal and sewage systems were overwhelmed. The result was three feet of raw sewage in my basement (c.f., me walking around avoiding floaters). When everything dried out, I had to replace some interior walls. You should have seen me doing some mad, motherfucking carpentry in the front yard! No blood shed, no costly professionals who would force me into awkward conversations (because they’d be thinking, shit, can’t this pussy even do this?), and a result better than what was there before the flood. My girlfriend is so in awe of me.

I am trying to awaken from the history of my ancestor's nightmare to comment on my Holy Trinity of Interests: art, literature, and music. Oh, and thoughts on dysfunctional families, which is to say families.
View all posts by Stephen Dedalus, Jr. →
This entry was posted in Navel Gazing, Yutes. Bookmark the permalink.