The One About the Triple-Flutter Blast 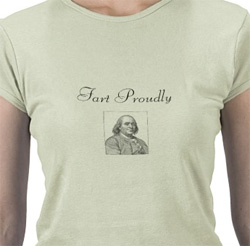 I am not proud about this chapter in my life. However, the one saving grace about your shameful personal incidents, traits, or behaviors is that the noble, continental, erudite Benjamin Franklin more than likely shared the incident, trait, or behavior with you.

Speaking of which, that’s how I learned about the triple-flutter blast, through a recording made in the 1940’s called “The Great Crepitation Contest of 1946.” You can learn about and even listen to this recording on the Interwebs (here). I am too afraid to listen to the recording again. I learned about it at the knee of my father and his old-timey 78’s.

Dad would stack these “shellac” records onto our old-timey record player. The “contest” was breathlessly broadcast play-by-play like an old-timey boxing match. However, instead of exchanging blows, the two contestants, the champion “Lord Windesmear” and the challenger “Paul Boomer,” unleashed an escalating crescendo of farts.

I have forgotten (or more likely repressed) most of the details of this recording, except for the very last words of the competition: “Oh, he shit! The champion is disqualified!” What a memory!

I will not claim that this recording or my parents’ embrace of this kind of humor provides much insight into my upbringing or character. However, it is a chapter of my life as a child growing up in a family that relished a good fart and a good fart joke. I laughed along with my parents: as an only child, what could I do? They defined my world and that world included, beef stroganoff, easy-listening radio, big-ass Oldsmobiles, and farts.

Ben Franklin’s world also included farts. That, and the company of European royalty, prostitutes, and the likes of John Adams and Thomas Jefferson. Franklin, always the practical observer, famously made inquiry to the Royal Academy in 1781 in response to their call for entries in a science contest. His letter, “To the Royal Academy of Farting,” asked the esteemed members of the Royal Academy to consider the “utility” of discovering a cure, of sorts:

It is universally well known, That in digesting our common Food, there is created or produced in the Bowels of human Creatures, a great Quantity of Wind. That the permitting this Air to escape and mix with the Atmosphere, is usually offensive to the Company, from the fetid Smell that accompanies it. That all well-bred People therefore, to avoid giving such Offence, forcibly restrain the Efforts of Nature to discharge that Wind. That so retain’d contrary to Nature, it not only gives frequently great present Pain, but occasions future Diseases, such as habitual Cholics, Ruptures, Tympanies, &c. often destructive of the Constitution, & sometimes of Life itself. Were it not for the odiously offensive Smell accompanying such Escapes, polite People would probably be under no more Restraint in discharging such Wind in Company, than they are in spitting, or in blowing their Noses. My Prize Question therefore should be, To discover some Drug wholesome & not disagreable, to be mix’d with our common Food, or Sauces, that shall render the natural Discharges of Wind from our Bodies, not only inoffensive, but agreable as Perfumes. (This is only an excerpt from Franklin’s excellent letter).

Who doesn’t love Ben Franklin, even if he farted? He remains a national treasure, was loved by the ladies, and is the Mac Daddy of paper currency. He also understood farting and did not pass judgment on the act, only the smell. And I am sure he dealt a few death eaters in his day.

You see, as a middle-aged man, I still fart and enjoy a good fart joke. However, instead of blaming my parents and that goddamn recording, because of Ben Franklin, I can embrace my farting. Please note: in social settings, at the gym, and in movie theaters, I risk the “ruptures” and “tympanies” feared by Franklin.

And before you get grossed out, dainty ladies: we know you fart, too.

I am trying to awaken from the history of my ancestor's nightmare to comment on my Holy Trinity of Interests: art, literature, and music. Oh, and thoughts on dysfunctional families, which is to say families.
View all posts by Stephen Dedalus, Jr. →
This entry was posted in Culture, Navel Gazing, Yutes. Bookmark the permalink.